Towards the end of 2012, Brescia’s center-right Mayor Adriano Paroli announced he was going to 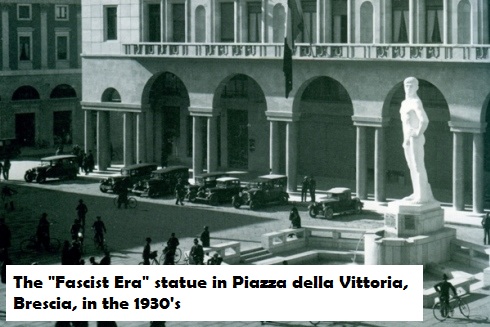 restore an old, 24-ft high fascist statue, popularly known as Bigio, near the place it occupied in the central Piazza della Vittoria for over a decade during Mussolini’s regime, from 1932 to 1945.

What follows is an account that we published in English in February 2013 to draw international attention to what was going on in Brescia. The Guardian ran a story on the so called Bigio in April 2013.

On June 9, 2013 Paroli was defeated in the mayoral race by the Centre-left coalition headed by Emilio Del Bono, who was elected Mayor with 56% of the votes. The new Mayor of Brescia made clear, and has since maintained, that he would not restore the Fascist Era statue in Piazza della Vittoria.

Brescia’s antifascist associations (led by WWII Partisans’ Ass.ns ANPI and FFVV) believe that the campaign to stop the Bigio from being restored in the centre of Brescia played no small part in convincing many undecided or reluctant left-wing voters to attend the polls and give a new government to the city.

The statue, the work of sculptor Arturo Dazzi (1881-1966), represents a young and muscular naked athlete, and was described as the embodiment of the regime by Benito Mussolini. Because of this, the statue was originally named All’era fascista (“Fascist Era”), and that has been its official name all along. It is a typical product of its time, a regime-inspired, rationalist piece of sculpture of no particular aesthetic merit. Folk wisdom named it colloquially “el Bigio” in the local vernacular, a possible reference to the grey color of the marble it was made of, but more likely a sly allusion to the statue’s male organ. The café right behind the Bigio (Caffè Impero) was offered the view of the statue’s naked buttocks, and was therefore dubbed el Caffè de le ciape. The statue cast its shadow on the square up 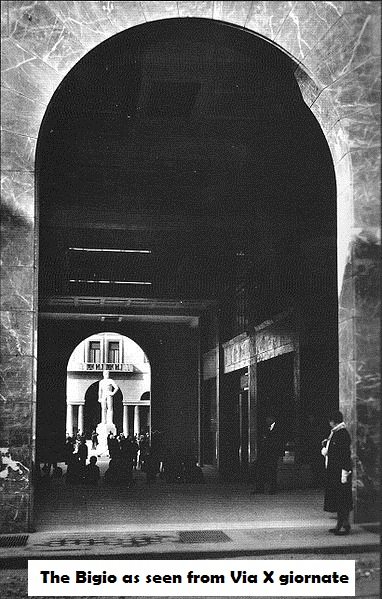 until the last phase of World War II, when the fountain basin right in front of it was destroyed in an Allied air raid, and the statue itself damaged. It was then removed and stored in a city warehouse, where it has been lying ever since. Some members of the  current majority governing the Comune (a number of which belonged to the Italian post-fascist MSI party) who have never left behind an old fascist legacy, embarked on a crusade to see the “Fascist Era” statue back on its feet, near the spot it occupied during Mussolini’s regime. The decision, which had been floated by a past administration but never put into practice, is now seen as final and is going to cost 150,000 € of taxpayer’s money, even more than the infamous Graziani memorial in Affile. So far, public outrage at this blatant display of fascist rhetoric, and at the waste of public money in a time of acute economic crisis, has not succeeded in changing Mayor Paroli’s mind on this issue. The local ANPI and FFVV 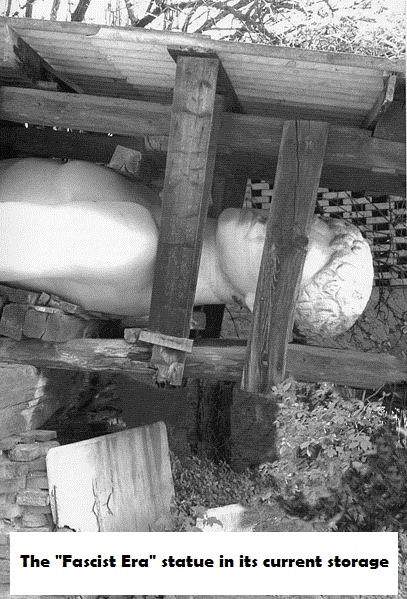 (a veterans’ association keeping alive the memory of the Green Flames, a catholic-inspired rebel army which fought in the Liberation Struggle) committees have campaigned with street information points, public meetings and online efforts, gathering nearly 2,000 signatures of concerned citizens.

Why ANPI opposes this decision

The reasons to oppose the restoration of the Bigio can be summarised as follows:

* this overtly ideological initiative is a way of getting even with the past, a revanchist operation by someone who never totally accepted the failure of Italy’s fascist past, the Country’s democratic transition and its anti-fascist Constitution.  Brescia has had her share of suffering, both through Mussolini’s regime and during the years of political turmoil in the 1970’s. The Bigio is supposed to tower only yards away from the two Stolpersteine which mark the spot 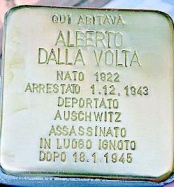 where in 1943 Guido and Alberto Dalla Volta (Primo Levi‘s closest Italian companion in Auschwitz) were arrested and dragged to Nazi Germany, whence neither ever came back alive. Just a short walk from here sits Piazza della Loggia, which was hit by a cowardly neo-fascist bombing which killed eight people and wounded dozens in May 1974.

* it sends the wrong signal to the growing number of youths joining neo-fascist groupings, which make daily use of squadrist intimidation and violence. Everyone will recall the unprovoked, vicious attack on Tottenham soccer fans in a Rome pub last November, with its shocking anti-Semitic overtones, which is only one in a series of violent incidents which seldom make the international headlines.

* the lack of any particular aesthetic or artistic value does not recommend restoring such a massive monument in Brescia;

* the cost of this operation is too high, particularly in the light of the current crisis, which has compromised even the most basic social services provided by the Comune, to the detriment of the weaker and needier members of our community.

1. Is the “Bigio” strongly connected to Brescia and the city’s history?

No. The statue was originally commissioned to sculptor Arturo Dazzi to figure in Rome’s Foro Mussolini. However, it was rejected and afterwards found its way to Brescia.

2. Does the “Bigio” have any aesthetic/artistic value? Someone claimed it might become Brescia’s own David.

No. The statue is a poor piece of sculpture. As anyone can see, any comparison with Michelangelo‘s Florence masterpiece is simply ludicrous.

3. Is the “Bigio” decision justified, as claimed, as an historic/philological operation to restore Piazza della Vittoria to its original state?

No. As Professor Valerio Terraroli of the University of Turin explained in a 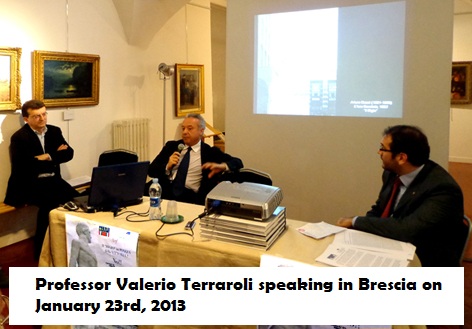 recent public meeting held in Brescia, the square as conceived by Marcello Piacentini has long since lost its original vocation as a Piazza. The statue could not possibly be put back in its original spot, as that’s where today’s underground car park’s emergency exit comes out.

4. Is opposition to the “Bigio” decision dictated by idelogy-driven, politically motivated animosity?

Quite the opposite. As explained above, the much-flaunted purpose of bringing back the Piazza to its original state has no grounds. Therefore, it is the city government’s stubborn intention to bring back this massive, ugly statue, which bears all the hallmarks of a politically motivated initiative with a clear revisionist intent.

More on this issue: